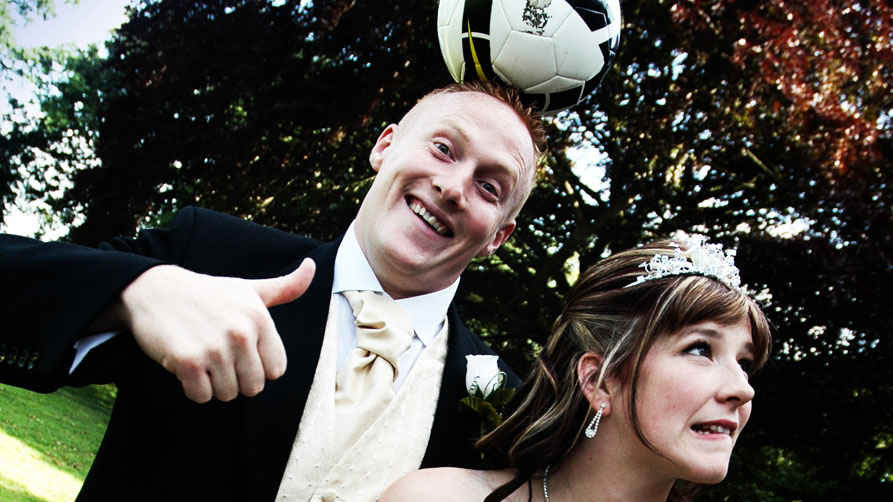 Meant to put this shot in ages ago. It shows Dan Magness, the Ginger Freestyler and his bride Julie.

Dan holds many world records for keeping a ball in the air. See https://en.wikipedia.org/wiki/Keepie_uppie. Let’s hope he can juggle all these extra things that marriage brings.

Here’s a clip from his web site:

Not only is Dan Magness a world class Football Freestyler, presenter and multiple Guinness World Record holder but meet him and you’ll find out that he’s probably the nicest guy you’ll ever meet!

His impeccable tricks and energy-filled presenting has led him to hundreds of different countries to perform for royalty, work with Celebrities, film TV shows and give his time to numerous charities.

Football skills and numerous Guinness World Records aside, Magness is a familiar face on TV screens worldwide after filming dozens of commercials, numerous documentaries and his own TV series, “Football Freestyler” where he was flown to 12 different countries to interview the greatest performers of our current time.

There are plenty of presenters, Guinness World Record Holders and Football Freestylers.  There’s only one Dan Magness.

Hugo in the snow. #cockapoo #cockerpoo

Looking forward to another shoot of the clothes fr

Taken of Ross around 2009 in the #leedsstudio #fea

Another fave from the #USN shoot in an #abandoned

Nina sitting on the edge. Meant I was standing. Pr

I believe her name was Natalie, taken in Enfield a

Natalie had some masking tape stuck to her shoe in

Another of Naomi, see yesterday's too. #playingthe

Continuing my #adventcalendar #advent here is the

Another of #irinapantaeva for my #adventcalendar

Loved doing this shoot of #USN in an #abandonedrai

One from Circa 2010 approx, I believe her name was

#adventcalendar #advent This one taken of Romey w

More images from my back catalogue for #adventcale

Continuing on with my #adventcalendar #advent here

Continuing my #adventcalendar #advent This image